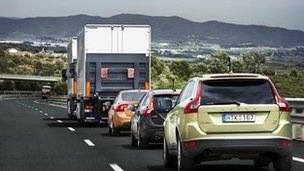 A convoy of self-driven cars has completed a 200km (125-mile) journey on a Spanish motorway, in the first public test of such vehicles.

The cars were wirelessly linked to each other and “mimicked” a lead vehicle, driven by a professional driver.

The so-called road train has been developed by Volvo. The firm is confident that they will be widely available in future.

The project aims to herald a new age of relaxed driving.

According to Volvo, drivers “can now work on their laptops, read a book or sit back and enjoy a relaxed lunch” while driving.

The road train test was carried out as part of a European Commission research project known as Sartre – Safe Road Trains for the Environment.

The convoy comprised three cars and one lorry.

Special features
“Driving among other road-users is a great milestone in our project. It was truly thrilling,” says Linda Wahlstroem, project manager for the Sartre project at Volvo Car Corporation

“We covered 200km in one day and the test turned out well. We’re really delighted,” she added.

The cars are fitted with special features such as cameras, radar and laser sensors – allowing the vehicle to monitor the lead vehicle and also other vehicles in their immediate vicinity. Using wireless communication, the vehicles in the platoon “mimic” the lead vehicle using autonomous control – accelerating, braking and turning in exactly the same way as the leader.

“People think that autonomous driving is science fiction, but the fact is that the technology is already here. From the purely conceptual viewpoint, it works fine and road train will be around in one form or another in the future,” says Ms Wahlstroem.

“We’ve focused really hard on changing as little as possible in existing systems. Everything should function without any infrastructure changes to the roads or expensive additional components in the cars.

“Apart from the software developed as part of the project, it is really only the wireless network installed between the cars that set them apart from other cars available in showrooms today.”

The three-year Sartre project has been under way since 2009. Other partners include UK car technology firm Ricardo UK, Tecnalia Research & Innovation of Spain, Institut fur Kraftfahrzeuge Aachen (IKA) of Germany and the Technical Research Institute of Sweden.

All told, the vehicles in the project have covered about 10,000km on test circuits.

The eventual aim of the project is to have lots of cars “slaved” to a lead vehicle and travelling at high speed along specific routes on motorways.