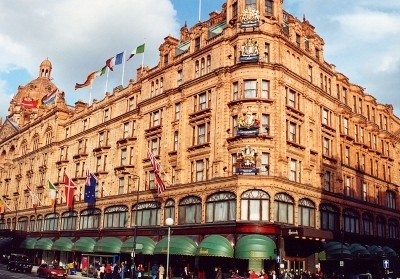 The Qatari owners of Harrods, the world-famous London department store, have paid themselves a whopping £100m dividend in their first full year of ownership after the retailer posted record annual profits.

The sterling performance reflects the significant capital expenditure made by the new owners of the Knightsbridge emporium in its operations, as well as the buoyant demand for luxury products among wealthy visitors to London from Asia, Russia, Brazil and the oil-rich countries of Africa, such as Nigeria.

Harrods, whose managing director is Michael Ward, is also likely to be enjoying strong trading during the Olympics, as foreign tourists flock to the capital. Qatar Holding, the investment fund of the emirates royal family, acquired Harrods for £1.5bn in May 2010 from its former owner, Mohamed al-Fayed.

The Qatari fund took a record dividend of £100.5m out of Harrods for the year to 28 January, more than four times the £22.7m paid the previous year. In 2010, Mr al-Fayed expressed his frustration in getting a dividend approved by the trustee of the Harrods pension fund after he sold the business to the Qataris.

Mr al-Fayed’s family, who acquired Harrods in 1985, paid themselves a previous record dividend of £74m for the year ending February 2002. Harrods has continued to power ahead and grew pre-tax profits by 15 per cent to £125.3m last year, according to accounts filed at Companies House.

The luxury retailer delivered turnover up by 11 per cent to £651.7m, driven by robust trading at its flagship in Knightsbridge, eight outlets at Heathrow and Gatwick airport, and online. This figure excludes items such as VAT, trade discounts and concession sales, which means the amount of money that passed through Harrods’ tills comfortably passed £1bn. The retailer has also expanded its online offer and now delivers products to more than 30 countries including India, Saudi Arabia and Australia.

In its annual report, Harrods said that 2011 had seen a “very significant programme of capital expenditure” of £107.8m, compared with £32.2m the previous year. This spend included its new watches emporium, which houses more than 35 brands, and the introduction of its “room of luxury” that showcases designer handbags and accessories at its Knightsbridge store.

The retailer also invested in a new head office in central London and a distribution centre near Reading. Harrods said it continued to “benefit from the value of the very significant spend on shop fittings invested by partner brands. The directors expect to continue with a high level of capital expenditure in 2012”.

…but there’s retail gloom, too

The development of new shopping centres has stalled in the UK, exacerbating the volume of non-food sales being grabbed by the rapidly expanding supermarket giants.

The property firm CBRE found that shopping centre space under construction has now tumbled to just 6 per cent of the overall retail pipeline from nearly 20 per cent before the financial crisis in 2007. Just 3.33m square feet of this space is set to be completed this year, compared with 13.02m sq ft five years ago.

Jonathan De Mello, the head of retail consultancy at CBRE, said: “This dearth of new development is causing increasing problems for store groups dependent upon speculative shopping centre development to meet their expansion targets.” He added the problem of few store opportunities for big retailers has been “exacerbated” by the increasing amount of non-food space being added by the supermarkets, such as Tesco, Asda and Sainsbury’s.

In addition to the consumer downturn, De Mello said the slowdown in construction activity has been driven by a reluctance among banks to provide financing for, and sovereign wealth funds to invest in, new shopping centres.

A separate survey from the accountancy firm PwC said retail insolvencies jumped by 10.3 per cent to 426 in the second quarter, including the administration of Game.