After opening Evolution Fresh stores in its hometown of Seattle and Bellevue, Washington, Starbucks is speeding up expansion with a shop in San Francisco now operating and another in Seattle set to open in the next month. It’s also quickly introducing the cold-bottled juice to grocery stores and may soon add Evolution Fresh branded food to its juice line-up at Starbucks cafes.

Chief Executive Officer Howard Schultz has said that selling juice and better-for-you food is a significant part of his recent health and wellness pursuit. The company has started opening Tazo tea shops and selling energy drinks made with green-coffee extract, all of part of Starbucks’s plan to get healthier.

“We have to look in the mirror and say: ’We were not providing as healthy products as we could have,’” Schultz said during an interview in Houston. “So as the result of that, we began a significant mission within the company to look at health and wellness.”

Starbucks, along with restaurant operators including McDonald’s Corp. (MCD), has been trying to improve its image as Americans become more concerned with high-calorie foods amid a national obesity epidemic. About 36 percent of adults in the U.S. are considered obese, according to the Centers for Disease Control and Prevention. In response, McDonald’s has promoted a “Favorites Under 400 Calories” menu, while Dunkin’ Donuts (DNKN) advertises so-called DDSmart items such as egg-white wraps and multigrain bagels.

American consumers are “more attuned to healthy eating and what they’re eating,” Dennis Lombardi, executive vice president at restaurant consultant WD Partners in Dublin, Ohio, said in an interview. Starbucks has an “open and uncontested playing field” to open juice stores in the U.S. as baby boomers and millennials look for more nutritious food and beverages, he said.

The first Starbucks shop opened in 1971 in Seattle’s Pike Place Market selling coffee, tea and spices, and has since expanded to more than 17,600 stores worldwide, including about 10,900 in the U.S.

While the chain hasn’t been known for health food, it has made some efforts, including introducing sugar-free syrups in 1997 and making 2 percent milk the default for espresso drinks at U.S. locations in 2006. More recently, the company has started selling 140-calorie oatmeal, so-called skinny lattes and smaller-portioned desserts.

“Evolution juice is going to take a while to evolve,” Larry Miller, an Atlanta-based analyst at RBC Capital Markets, said in an interview. “They’ve talked about it being a billion- dollar brand, but they’ve said that about a lot of things. There’s a lot of potential for them if they can crack the code on health and wellness.”

Starbucks stores with bottled Evolution Fresh juice are already selling more than they sold of PepsiCo Inc. (PEP)’s Naked brand drinks, which are lower priced, Schultz said during the interview.

Last year, Starbucks removed the word “coffee” from its logo, paving the way for its recent non-java acquisitions, which included Evolution Fresh for $30 million in November 2011. Analysts project revenue rose 14 percent to $13.3 billion in the company’s fiscal 2012, the third straight annual gain, according to data compiled by Bloomberg. Starbucks shares are little changed this year, compared with a 6.1 percent decline for the Standard & Poor’s 500 Restaurants Index.

America’s collective weight gain isn’t the result of chili cheese fries — it’s the extra 100 or 200 calories a day that people are consuming, said Margo Wootan, nutrition policy director at the Center for Science in the Public Interest, a Washington-based consumer advocacy group. For that reason, diners should still proceed with caution at healthier restaurant chains, she said.

“You don’t want to overdo it, even on healthy foods,” she said. “You still have to watch the portion sizes. When you go into a restaurant that has a healthy reputation, in some ways you need to be even more vigilant.”

Consumers should limit their juice intake to about six to eight ounces per serving because, while it may be healthier than soda, “it’s still a lot of extra calories that most people can’t afford,” she said. “It’s really much better to get your fruit from pieces of whole fruit.”

For breakfast, Evolution Fresh has eggs scrambled with wild rice for $4.95 and 120-calorie steel-cut oatmeal, while dessert options are limited to a bite of dark chocolate, a granola bar, chocolate coconut mousse and an oatmeal cookie.

The stores themselves are a far cry from Starbucks’s earth- toned cafes. Evolution Fresh eateries have a more modern feel, with marble countertops and metal furniture, said Arthur Rubinfeld, president of global development and Evolution Fresh retail. The patent-pending taps, which dispense juices just like beer on draught, are below a changing video screen touting nutritional benefits such as antioxidants found in blueberries.

While restaurants hype their tactics to get America to eat healthier — listing calorie counts on menu boards, cutting sodium and fat and selling more produce — consumers are eating less fresh fruits and vegetables, according to the U.S. Census Bureau and Department of Agriculture. Americans ate about 184.8 pounds (84 kilograms) of fresh vegetables a person in 2009, a 7.9 percent drop from 2000, the data show.

Schultz is determined to change that as Starbucks looks to sell other healthier food and possibly gluten-free items.

“The health and wellness opportunity we have,” he said, “this is just the beginning of what we think we can do.” 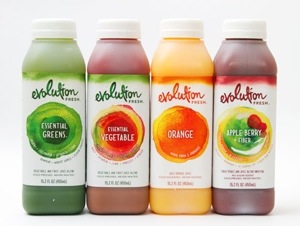