Philip Green, the billionaire owner of the TopShop fashion chain, said he may spend 5 billion pounds ($8 billion) on an acquisition should the opportunity arise.

“If something turns up that we like, we might do it,” Green, 60, said in a telephone interview today. “We’re in a position where we could look at anything. The fact is that everybody comes to see us at some point, so I think we’ve got a seat at the table to see things.”

“Running more stuff in the same space, not attractive,” said Green, who hasn’t made a major acquisition since 2005, when he purchased the Etam chain in the U.K.

The billionaire said he plans to pursue expansion internationally and online for his Arcadia empire, which he acquired in 2002 for 850 million pounds. The U.K. retailer, which includes the Dorothy Perkins and Burton chains and has 615 international franchised outlets, today reported a 25 percent profit gain as fewer markdowns offset stagnant sales.

Arcadia will open its fourth U.S. store in Los Angeles next year and is adding language-specific websites and flagship stores such as a recently opened Sydney outlet.

Arcadia, which has a presence in 112 countries, said it focused on managing inventory and product originality last year to drive earnings as sales were hurt by weak consumer spending.

Pretax profit rose to 166.9 million pounds before one-time items in the year ended Aug. 25, the London-based company said today in a statement. Revenue was almost unchanged at 2.68 billion pounds, while sales at stores open at least a year fell 0.7 percent, led by a 3.2 percent drop in the U.K.

“Trading conditions remain challenging, therefore exciting and engaging our customer across multi-channels is at the top of our agenda” Green said in the statement.

Green said he’s closed about 60 outlets this year, having said last year he had 260 store leases up for renewal.

“The closure of shops, the shake-up, you talk to every retailer that has a lot of shops, all of them will tell you they’d like to get rid of some stores,” he said. 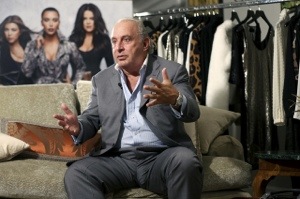