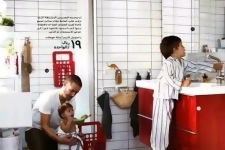 Ikea is a step closer to launching wholly owned stores in India as part of a US$1.9 billion (Dh6.97bn) investment plan.

The Swedish furniture giant has been given the go-ahead by India’s foreign investment promotion board.

A reform announced in January by the government removed a cap at 51 per cent for foreign investment from retailers that sell only one brand to allow 100 per cent investment.

Ikea raised concerns about a clause that stated 30 per cent of sourcing had to be through small and medium-size enterprises. This requirement has since been relaxed.

“They’ve gone ahead with disclaimers and they’ve asked for some concessions, especially on sourcing norms,” said Ankur Bisen, the vice president of retail for Technopak, a consultancy.

Ikea has proposed to open 25 stores in the country. The investment plan must still be approved by a cabinet committee before Ikea can launch in India.

The British footwear chain Pavers has also applied to set up wholly owned stores in India.

In September, the government announced it would open up the multi-brand retail sector to up to 51 per cent investment by foreign investors, as part of its efforts to boost foreign investment flows into India, which have fallen as the country grapples with slowing economic growth.