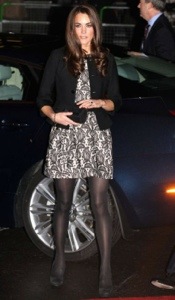 Inditex, the parent company of Zara, made an astonishing £1.3 billion in profits over the nine months to October 31.

But, the 27 per cent rise was not the only significant advancement the company made. In the same time frame they have also opened 360 new stores in 54 different markets and created 6,598 new jobs, reports BBC news

Last week, the Spain-based company celebrated the opening of their 6,000 store with the launch of a new 16,200-square-foot Zara UK flagship on London’s Oxford Street. The high-street chain is loved for its ability to quickly adopt catwalk trends and reproduce them at a consumer-friendly price point and rapid speed.

The Duchess of Cambridge has been spotted in Zara pieces a number of times, which goes some way to explaining it’s huge rise in popularity over the last 18 months. In December 2011, she wore a £69 lace-print dress from the shop which proceeded to sell out country wide. She also chose a cornflower-blue dress from the brand for her appearance the day after her wedding.