Despite a tough retail climate, Agent Provocateur expanded sales by opening boutiques in cities such as Madrid, Rome and Amsterdam.

The retailer added that trading over the eight months to December had remained strong, with turnover up 21pc on the previous year. Online sales have grown 35pc.

“We remain focused on growing the business internationally and are excited about our future projects,” he added.

With a diffusion range designed in collaboration with actress Penelope Cruz and her sister Monica set to launch next year, Agent Provocateur is counting on continued growth.

Mr Hogarth told The Times that he believed the less-expensive range will eventually sell more than the rest of the business.

“It’s going to be tremendous. Around that price point, there is a big gap in the market,” Mr Hogarth said.

“We believe that, certainly within five years, it will be bigger than the rest of the business in volume terms.”

At an average price of £40, the range’s briefs, thongs and corsets will be less than half the price of Agent Provocateur’s main line, which averages at £95.

The range will be sold through Harrods, Selfridges and Harvey Nichols; it will go on sale next August and is named L’Agent.

In a competitive climate, Marks & Spencer recently turned to Victoria’s Secret, the luxury lingerie brand, in an attempt to stem falling clothing sales.

The retailer hired the chief creative officer of Victoria’s Secret, Janie Schaffer, in November. She has been responsible for all clothing, lingerie and beauty at the US brand, earning her the nickname of the “Knicker Queen”. 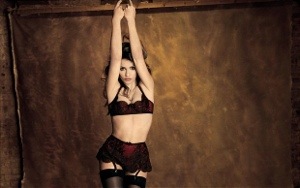