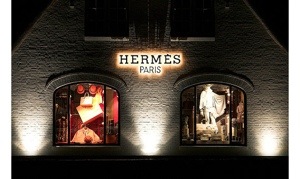 Hermès also noted its operating margin, which widened to 32.1 percent of sales, attained its highest level since the company went public in 1993.

Dollar figures are converted from euros at average exchange rates for the periods in question.

In a statement, Hermès gave no sales or earnings guidance, and said its cash pile stood at 686 million euros, or $882.1 million, at the end of last year.

Management had previously stated it was sticking to its long-term forecast of 10 percent annual sales growth in 2013.

The firm invested 370 million euros, or $475.7 million, last year, primarily to burnish its store network and production capacity. Hermès opened two new branches, renovated or enlarged a dozen other boutiques, and purchased the property for its unit in Beverly Hills, Calif.

While some of its luxury competitors had reported ebbing demand in China, Hermès said sales in Greater China rose 34 percent in the fourth quarter and were up 28 percent in 2012 as a whole.