Every retailer in the country – from Tesco to the corner shop newsagent – talks about how they are battling to evolve their own business to cope with the growing influence of the Seattle-based company.

The mighty Tesco has been forced to admit its biggest hypermarkets are outdated and overhaul its non-food range, Comet and HMV have fallen into administration, newsagents have installed lockers where shoppers can collect Amazon orders, and people are now reading books on their Amazon-made Kindles.

Even those retailers operating in sectors that Amazon does not currently serve – such as food and fashion – are worried about what happens when it starts.

Yet, at the same time, so many uncertainties remain about the future of Amazon, launched in 1995 as an online bookstore.

The speed of Amazon’s development and innovation has left parts of the high street in ruins. But the company does not appear to have cracked the most basic business rule of them all – how to make a profit.

The row around the lack of corporation tax paid by online multinationals such as Amazon tended to miss this pivotal point – that a key reason Amazon does not pay much tax on its multi-billion pounds of sales is that it does not much make much profit.

So, while bookshops are battling to make enough money to pay the rent and Tesco is trying to explain to shareholders why its annual pre-tax profits have fallen to £1.96bn, Amazon is playing a different game entirely.

So far, shareholders in the US have backed Amazon because they believe its rapid growth will eventually deliver it to a scale and market dominance that generates substantial profits and investor returns.

Jeff Bezos, the founder of Amazon, has made a persuasive case for Amazon’s future prospects. He has long expressed his disdain for short-term profitability, constantly emphasising the need to plough funds into growing and evolving, whether through new hi-tech warehouses or acquisitions. Profits, he has always argued, will come later.

So far, Bezos has delivered.

Amazon is the clear market leader in a rapidly growing industry and experts predict it will be the ninth-biggest retailer in the world by 2018, despite having no stores.

Over the past five years, shares in the company have risen by more than 500pc.

In the UK, Amazon first arrived in 1998 through buying bookpages.co.uk, which eventually became Amazon UK. In the following 15 years, the speed at which Amazon has changed how customers shop and the retail industry itself is eye-watering.

According to data from Experian, Amazon accounts for 12pc of all visits to retail sites in the UK. Only auction site eBay has a larger share, with 19pc, while Argos accounts for just 2pc.

Despite the fact it is one of the longest-established online retailers, its market share on the internet is still growing. In the past year, visits to Amazon increased 80pc, more than double the 35pc growth for retail overall.

In terms of sales, Amazon now controls 23.4pc of the entertainment market, up from 20pc a year ago. Tesco, its nearest rival, has just 13.2pc

But it not just this dominance of the market that rivals admire, it is the quality of the technology and distribution network at its disposal.

Amazon’s distribution network – which includes eight fulfilment centres in the UK – is unrivalled for speed. Meanwhile, Amazon’s website is also way ahead of other retailers in terms of how to condense its huge array of products into a relevant offering for customers, and how to encourage shoppers who visit the website to spend more than they intended.

Amazon’s technology allows it to suggest relevant products that customers might want to buy based on their previous searches and purchases, while personal emails are also sent to users.

Retail experts talk about how personalisation is the next big step for online retailing, but Amazon is already there.

Yet, the profit issue suggests that Amazon’s model is not infallible or entirely proven. As high street retailers have to adapt to fight Amazon, so might Amazon have to adapt, too.

In order to make sustainable profits to please investors, the retailer could eventually have to turn off the tap on capital expenditure and cutting prices, while some retail experts have suggested that Amazon could start to focus on making money through its marketplace service, which offers a platform for other retailers to sell their products.

Some rivals have now found ways to take on Amazon. Electricals retailer Dixons, whose demise at the hands of Amazon has long been predicted, is growing sales in the UK. The company, which has 21pc of the electricals market compared with 5pc for Amazon, has focused on matching Amazon on price, then striking deals with key suppliers, such as television maker LG, to sell products exclusively – meaning that Amazon cannot sell them at all – and drastically improving customer service.

Dixons believes its high street stores and staff are key in the battle with Amazon – which can appear as faceless to customers – with shops acting as collection points for orders.

It would be foolish though to underestimate the ambitions of Amazon. It has built an unassailable position in online retailing and now is trying to take on the biggest three retailers in the world – Walmart, Carrefour and Tesco.

Amazon is still investing billions of dollars every year into new infrastructure and exploring new ventures. For example, Amazon’s fledging food business, AmazonFresh, is expanding from its home city of Seattle to California, and there are rumours that a mysterious warehouse it has bought near New York could be used to expand the grocery offer to the east coast. 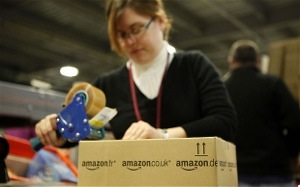