HYDERABAD: Swedish retailer IKEA could locate its first store in Hyderabad, likely choosing a city which is a bone of contention in a state trying to cope with tumult because of an impending bifurcation.

IKEA, whose India plan won final approval in May, will invest at least $100 million (. 630 crore) in Andhra Pradesh’s capital, according to two state government officials who met the company’s India head Juvencio Maeztu on Wednesday. Maeztu himself was not available for comment.

“The IKEA team is looking for at least five acres of land at a prime location in the city. They did not seek any incentives over and above those being offered by the state government as part of its policy for mega projects,” said a senior bureaucrats who met the team from the Swedish company. “They have promised to come up with a detailed project proposal in couple of weeks.”

The choice of Hyderabad at this juncture would indicate the retailer’s confidence in the attractiveness of the city as an investment destination. After the Congress threw its weight behind the creation of Telangana by carving out 10 districts from Andhra Pradesh, the state has been witnessing daily protests by groups opposed to such a move. Both sides are laying claim to Hyderabad, which is home to companies such as Google, Microsoft and Facebook.

IKEA has said that it will invest more than . 10,000 crore to set up 25 stores in India. It has said that the first round of investment will happen in Haryana, Andhra Pradesh, Maharashtra and Karnataka. Last month, Maetzu met Haryana chief minister Bhupinder Singh Hooda. IKEA has committed to source 30% of its inputs locally from small businesses to comply with the conditions laid down by the government. At least 1,000 people will be employed directly once the store opens, a state government official said. 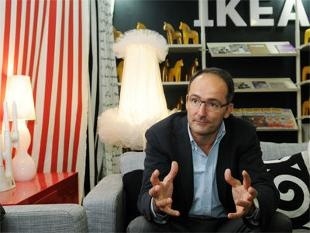