Middle East customers are among the most sophisticated in the world

Dubai: Louis Vuitton, the world’s biggest luxury brand in terms of sales, plans to double the size of its existing Dubai Mall store, Roberto Eggs, the company’s president for Europe, the Middle East and Africa told Gulf News in an exclusive interview on Tuesday.

“This is going to be the largest store in the Middle East — it will be our flagship store,” Eggs said. He added that there will be announcements of other projects soon.

It opened two other stores in the region this year, including one in Abu Dhabi’s The Galleria, and another in the Avenues Mall in Kuwait, which offers customers made-to-order handbags. The Dubai store may see the same concept in the future, according to Eggs.

LVMH is increasing prices and slowing retail expansion at Louis Vuitton. The world’s largest luxury goods maker has seen slow growth in its fashion and leather goods division, Which also includes the Dior and Celine brands, with sales up 4 per cent in the first nine months of the year, down from 5 per cent in the first half.

Louis Vuitton is developing its product offering to its customers. Next year, the brand will focus on women’s handbags, its largest product category, offering a range of shapes and colours. It’s other products include clothes, shoes, jewellery and accessories.

Nicolas Ghesquière, Louis Vuitton’s newly appointed creative director for women’s fashion, will launch his collection of ready to wear items, bags and shoes by mid to end of next year.

Additionally, the brand will develop its travel items, including trolleys that will come in new materials and colours.

“Customers can expect creativity on ready-to-wear and shoes- and some surprises,” Eggs said.

Commenting on how Louis Vuitton maintains it brand value, Eggs said that the brand will “never” discount its products. “Because we believe we are selling brand value and brand equity,” he said. He also said the brand manufactures some of the leather used in its products.

He added that the brand is “forward looking” and “long-term oriented,” he said.

Asked if Louis Vuitton would like to combine exclusivity with affordability, Eggs said: “We want to be exclusive but not exclude clients.”

Middle Eastern customers have long been “sophisticated” buyers, according to Eggs. He added that the region is among the brand’s key markets.

Elsewhere, such as Asia and Latin America, customers are “shifting towards products with high quality,” he said.

Louis Vuitton celebrates 30 years in the Middle East this year. 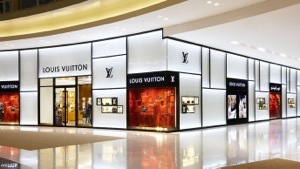