Tuesday, 19 November 2013 Abercrombie & Fitch, owners and operators of Hollister Co., are introducing new changes to the existing store concept for Hollister. This announcement comes after the parent company reported its total sales for the third quarter had declined 12 percent from 1.17 billion US dollars, to 1.03 billion US dollars and the impending closure of all Gilly Hicks stores by 2014.
During aweb cast discussion with analysts on the 6th of November, Craig Brommers, senior vice president of Marketing, introduced a new store concept for Hollister stores in the US. The new store concept features large store front windows and a smaller interior, which will showcase a video wall designed to display more in-store content, similar to the store concept used in Europe.
The new store concept for Hollister shops will offer more selling space, due to reconstruction reductions in the store stock-room and other non-selling spaces. It is designed to look more like a traditional mall store with big store windows, so customers can look inside and see the items displayed, according to Bizjournals. The new store exterior design is simple, without the traditional Californian beach hut vibe and green front porch outside the store entrance.

However Abercrombie & Fitch failed to pass on this information with their court appeal, which requested that the District Court suspend the injunction to make all Hollister stores in US accessible to wheelchair bound customers.

The current store concept for Hollister Co. stores was designed and constructed after the ADA Amendments Act of 2008 was passed. The store concept included a porch outside the shop entrance with small steps, which was designed to make customers feel like they were entering a surf hut and reinforce the Hollister brand image.

On the 20th of August 2013, US district court Judge Wiley Y. Daniel ordered Abercrombie & Fitch to make 231 nation wide Hollister stores wheelchair accessible. Then on the 9th of September Abercrombie & Fitch filed an appeal and a separate motion to suspend the injection, arguing that the ruling would require entrances to be “torn out and reconstructed, resulting in lost sales and customer goodwill.”

However this week the ruling Judge Daniel denied their appeal and ordered that Abercrombie & Fitch remodel 77 Hollister store entrances per year, as it did not see any viable cause for Abercrombie & Fitch to delay making its Hollister stores wheelchair accessible, according to michaelhingson.com. Brommers did not mention when tests for the new store concept would occur or when a foreseeable rollout of the new store model would occur, but with the new court order in place it will most likely occur sooner than later.

Hollister Co. was founded in 2000 by parent company Abercrombie & Fitch. The brand image was created around the laid back southern Californian lifestyle and now is present in over 20 countries worldwide. 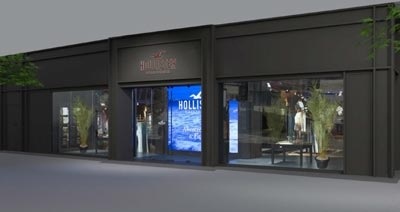