The handbag brand Radley is planning to take its famous Scottish Terrier logo across Asia after getting sales and profits back on track in the UK.

The company, owned by private equity houses Exponent and Phoenix, is in discussions with “multiple partners” about opening franchise stores across the Middle East and Asia, including China.

Radley was founded by Lowell Harder in 1998 when she started selling her colourful handbags from a stall in Camden Market.

The brand grew rapidly but slumped into the red after the collapse of Lehman Brothers as British shoppers reined in spending and Radley’s colourful handbags fell out of fashion. Exponent and Phoenix, who bought Radley in 2007, also pulled the brand out of the US as they scrambled to preserve cash.

However, in the year to the end of April, like-for-likes sales rose by 9pc and total sales by 7pc to £64m. Earnings before interest, tax, depreciation and amortisation doubled to £4m.

Radley has modernised its handbag designs – with Harder back as creative consultant – and launched new non-leather products with print designs including its famous dog. Radley is the bestselling handbag brand in John Lewis and House of Fraser.

Xavier Simonet, who was parachuted into Radley as chief executive last May, said that “now is the time” to open stores overseas.

Simonet said: “A big part of the strategy is international growth. The next step, as well as UK growth, is to expand internationally.”

It is understood that Radley’s owners are backing the plans by acquiring the company’s bank debt.

Exponent and Phoenix have bought roughly £20m of debt from NAB and BNP Paribas at a “material discount”, according to sources.

The purchase will potentially allow Radley to reduce its interest payments and focus its investment on growing outside the UK.

There have been rumours that the private equity houses are preparing Radley for a sale or a float amid a wave of activity in the retail sector.

However, Simonet, a Frenchman with an Australian citizenship who previously worked for LVMH across Europe and Asia, denied there were plans for a sale.

“I can confirm there is nothing happening at all,” Simonet said. “We are entering a new growth phase.”

Despite Radley struggling in the US, Simonet added: “There is a strong reason that Radley is going to go global – it distinctiveness.”

The company describes its products – which also include accessories such as purses and iPad cases – as “affordable luxury”. Its handbags are priced at between £80 and £350, below luxury rivals such as Mulberry.

According to Simonet, there is growing demand from the Chinese middle classes for upmarket fashion priced below the traditional luxury brands.

He said: “What is new is the importance of affordable luxury. It is a balance between beauty and functionality”.

Radley already has a store in Kuala Lumpur and sells its product in ten countries through department stores. However, it is planning to grow overseas by opening in Taipei, the capital of Taiwan, this month.

The company is looking to open 10 stores outside the UK by 2015, with talks over shops in Australia and the Middle East.

In addition, the company plans to open up to five more stores in the UK over the next three years alongside its concessions in John Lewis and House of Fraser.

Simonet is also looking to place the brand’s products into Harrods and Selfridges.

With this in mind, Harder has overseen the launch of a new range called No1 Radley. The new products are priced slightly above Radley’s existing handbags.

“We are not leaving our core strengths,” said Simonet. “We are not just trying to protect the UK [sales], we need to grow in the UK.”

Radley employs 500 people and has a team of six designers based in Camden, which has become a creative hub for British fashion businesses.

According to Simonet, Radley’s founder – who created the terrier logo because of her love of dogs – remains at the heart of the business.

“She is the brand,” Simonet said of Harder, who works two days a week. “She has the right and legitimacy [as a designer].

“In the UK we were one of the first to say ‘This is a bit boring, lets try some more colours.” 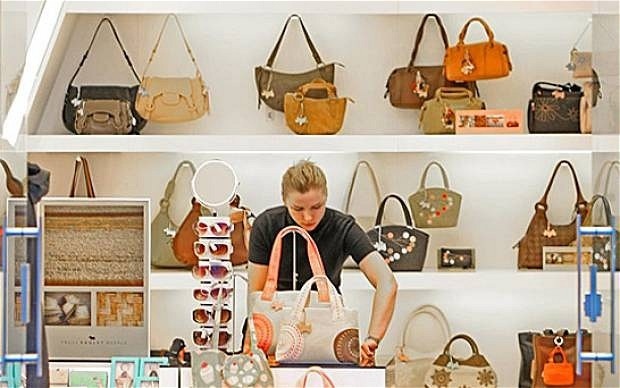