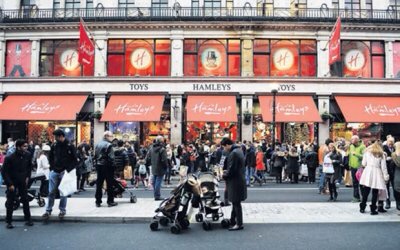 Hamleys will face fresh competition when The Toy Store opens on Oxford Street
THE MIDDLE Eastern owner of Hamleys’ rival, The Toy Store, is said to be considering a takeover bid for the country’s most famous toy shop.
Gulf Greetings has sent a letter of intent to Hamleys’ French owner Ludendo, highlighting its interest in acquiring the iconic Hamleys names, according to Retail Week.
It is the second time this year that Hamleys has been at the centre of bid speculation. Ludendo was reportedly in talks last month with House of Fraser’s Chinese owner Sanpower over a potential sale.
The news also comes as The Toy Store prepares to challenge Hamleys by opening a huge 27,000 sq ft store on Oxford Street in the West One shopping centre next to Bond Street Tube station.
Hamleys was established by Cornishman William Hamley in 1760 in High Holborn and was originally known as Noah’s Ark.