American Apparel has filed for bankruptcy protection to wipe out most of its debts and provide more breathing space for its restructuring.
American Apparel said 95pc of its secured lenders have given their blessing to the restructuring, which will see $200m-worth of bond liabilities wiped out while also bringing in $70m of fresh funding from the lenders.
As a result of the reorganisation, American Apparel’s debt will drop from $300m to $135m, the firm said, adding that it would cut its interest bill by $20m a year.
“Throughout the implementation of this process, American Apparel will continue to operate its business without interruption to customers, employees and vendors,” the firm said, adding that the restructuring will take about six months.
“By improving our financial footing, we will be able to refocus our business efforts on the execution of our turnaround strategy,” said chief executive Paula Schneider.
Over the summer, American Apparel reported a 17pc decline in quarterly sales and a net loss of $19.4m, which it blamed on a lack of new designs for spring and summer as well as its efforts to slash costs. The firm was also in breach of its debt covenants.
The US fashion retailer, which has shops in nine British cities, has built its brand on making all of its clothes in Los Angeles.
Mr Charney, the Canadian who founded American Apparel in 1989, has filed several lawsuits against the firm since it dismissed him for alleged misconduct last year.
American Apparel’s New York-listed shares have fallen from more than $2 two years ago to 11 cents last week. 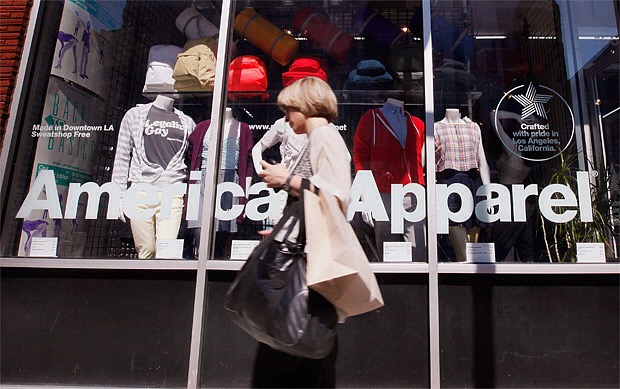