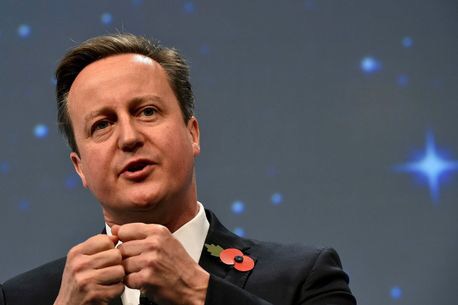 David Cameron has gone to war with store bosses by refusing to cut business rates.
High street chiefs have pleaded with the Government to reduce the levy, which rakes in £26billion a year.
But the Prime Minister said a review of the current system wouldn’t bring down the total amount raised.
He told the CBI conference in London: “I don’t want to pretend there is a simple answer.
“Our review of rates is not likely to cut the overall burden but (look at) if the burden distributed fairly.”
He added: “We are not going to magically find the money from elsewhere.”
Hordes of Christmas shoppers Getty

Cameron was responding to a question from the British Retail Consortium, which claims the industry faces a £14bn jump in costs by 2020 from a raft of taxes and initiatives, including the National Living Wage.
Without reform of business rates, which increase every year in line with inflation, it says retailers will facing a total bill of £41.4bn between now and then and could lead to 80,000 shop closures over the next two years.
Read more: CBI warns that ‘gloomier’ global outlook will hit UK economy
Cameron’s comments will anger the high street, which has been one of the loudest critics of business rates.
Some of Britain’s top store bosses, including the head of Tesco, recently wrote to Chancellor George Osborne calling on him to ease the burden in the forthcoming spending review, as the Mirror recently revealed.
A BRC spokesperson said: “We will continue to press the case for rates reform so that we can effectively work with the Government on delivering the living wage.”
Should the Government cut business rates to help the high street?