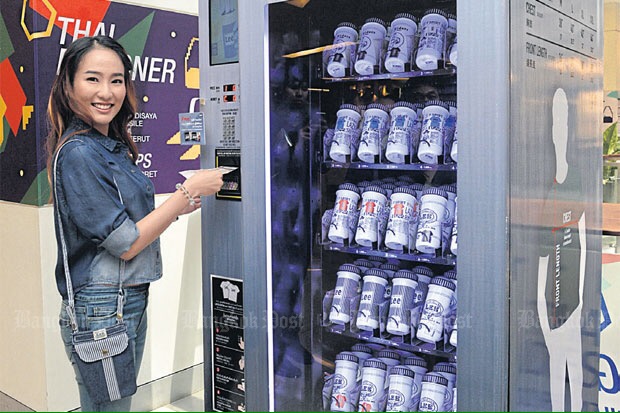 Focus on Chinese tourists on the cards

The Lee jeans brand is exploring new opportunities from foreign tourists and vending machines.
Putthichai Chaiyaweach, senior brand manager for Lee jeans at Central Marketing Group, said CMG had begun selling Lee T-shirts from a vending machine, a first for Thailand.
CMG has four Lee vending machines — two in CentralWorld, one in Robinson Department Store’s Rama IX branch and one in Big C Supercenter’s Ratchadamri branch — with the number increasing to 200 within three years.
In this initial stage, the vending machines are selling only limited-edition T-shirts for 1,000 baht.
CMG will add more products including denim jeans next year.
“We’ve created a new type of sales channel to expand our customer base to reach more tourists, particularly Chinese, who spend big on Lee jeans, as well as the new generation of shoppers,” Mr Putthichai said.
Foreign tourists account for 30% of Lee sales, and 70-80% of these are Chinese.
Spending by Chinese tourists’ at King Power Duty Free shops is five to 10 times higher than the overall total at other Lee points of sales nationwide.
Each Chinese tourist buys three to five pairs of Lee jeans per time, as the price is very high in China — 5,000 to 10,000 baht a pair of jeans compared with 1,800 to 2,500 baht in Thailand.
“Therefore, we’ll focus more on selling denim jeans to them next year, and vending machines at tourist destinations will be another new sales channel they can access,” Mr Putthichai said.
Sales of Lee jeans this year look set to grow by 30%, the highest rate in three years.
Mr Putthichai credited the higher-than-expected sales largely to foreign tourists, particularly Chinese, as well as the opening of new points of sales.
Popular Thai actor Mario Maurer has been signed as Lee brand ambassador to help spur demand from Chinese tourists.
Spending per bill per shopper has increased to between 3,000 and 4,000 baht this year from 2,000 baht last year, Mr Putthichai added.