Greenpeace SA has accused retail giant Pick and Pay of failing to comply with its clean energy programme launched three months ago.
The programme calls on businesses to commit to 100% renewable energy and stop using fossil fuels.
Activists have staged a protest outside the company’s headquarters in Cape Town.
Greenpeace says Pick ‘n Pay has the highest electricity consumption of all retailers in the country.
As part of their protest against the retail giant, activists delivered a solar ring outside the company’s headquarters.
Its crown is made of solar panels. They say it symbolises what they hope will be a lasting bond between the chain store and solar power.
“We’ve been trying to engage with Pick ‘n Pay but we haven’t seen any changes. We’ve had meetings and nice exchange of words but aren’t showing the kind of commitment to renewable energy that we would really like to see. We are proposing to them that they make a firm commitment to the son and that they commit to a renewable future for their brand,” says activist, Penny-Jane Cooke.
Cooke says the retailer has an ethical obligation towards its millions of supporters that they care about the environment. She says if Pick ‘n Pay takes their suggestions on board, they could save enough energy to power 65 000 homes.
“We are saying you need to find out how quickly your business can go renewable, and then commit to that and talk about it publicly. You have to have a plan both short and long term as to how you’ll achieve that. So it’s about making your business as efficient as possible. South Africa has been a really energy intensive country in the past – which means that business can make a lot of savings in the future and they need to be really ambitious about those energy savings, and finally what is important for South Africa is lobbying for renewable energy,” says Cooke.
Greenpeace says converting to solar energy will also create thousands of the much needed jobs in the country.
Pick ‘n Pay spokesperson Izak Joubert, says they are committed to further talks with Greenpeace. 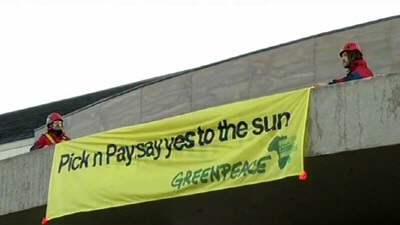