SPAR has opened its first food stores in Albania through a partnership with Balfin Group.
The two hypermarkets in Tirana East Gate and in the QTU shopping centre span 7,200 and 3,800 square metres respectively.
Balfin Group is the largest private company operating in Albania. The company entered into food retail in 2005 with the development of the Euromax chain of stores and has been operating 15 large food retail stores under the Carrefour brand.
As part of Balfin Group, SPAR Albania will convert the current 15 stores. By the end of 2017, Balfin Group plans to open over 100 supermarkets and 10 hypermarkets as part of a €50 million investment in the country.
The entry into Albania means that SPAR currently operates in 44 countries. SPAR International reported global retail sales in 2015 of €33 billion from over 12,100 stores across four continents.
SPAR International managing director, Tobias Wasmuht said: “We are delighted to be partnering with Balfin, a leading privately owned Albanian business Group, to develop SPAR Supermarkets and INTERSPAR Hypermarkets in Albania. Working in true co-operation with the Balfin Group, we are able to unite the best of international with the best of local, creating an excellent proposition of value, service, quality and choice for our customers in Albania.”
The launch of the two hypermarkets has been complemented with a television campaign and city wide outdoor advertising. 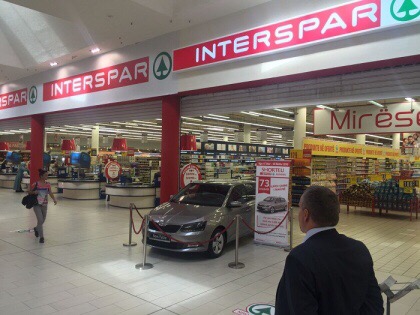