WH Smith has increased its full year pre-tax profit by 8% to £131 million following a strong performance from its travel business.
In the year 31 August, group like-for-like sales edged up 1% with total group sales rising by 3% to £1.212 billion.
The group’s travel business, which includes stores at airports and train stations, grew its total sales by 10% and like-for-like sales by 4%. Trading profit climbed by 9% to £87 million, including £7 million from WH Smith’s growing international channel.
WH Smith opened 18 new travel units in the UK during the year, taking the total to 576 units. It won a further 32 units in its international channel, making a total of 232 units, of which 192 are open. As at 31 August 2016, the business operated from 768 units.
Stephen Clarke, WH Smith group chief executive, said: “We have delivered a good performance across the group with earnings up 10%.
“Our travel business continues to perform well with strong sales across all channels and profit up 9%. We have further extended our food to go ranges and during the year we sold over ten million ‘meal deals’.”
Trading profit in WH Smith’s high street business rose by 5% to £62 million in the period. Compared to last year, total sales were down 3% while like-for-like sales fell by 2%.
Clarke added: “In the high street business, our profit focused strategy continues to deliver sustainable growth with profit up 5%. Stationery sales have been strong in the year and in books we are delighted with the success of the Zoella Book Club which launched during the summer.”
During the second half, the high street business delivered £6 million of cost savings, which was £2 million ahead of plan. In total, cost savings in the year were £11 million. An additional £10 million of cost savings have been identified over the next three years making a total of £19 million of which £10 million are planned for 2016/17. As at 31 August 2016 High Street operated from 612 units.
“Looking ahead to the overall group performance, Clarke said: “We will continue to focus on profitable growth, cash generation and investing in new opportunities. While the economic environment is uncertain, we are well positioned for the current year and beyond.” 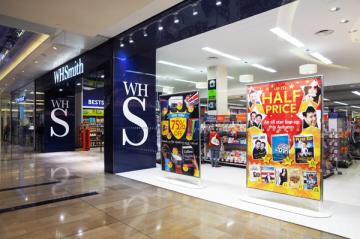