In about 90 days, the largest mall in East and Central Africa will open its doors in Kenya.
The highly touted Two Rivers Mall in Nairobi’s posh suburb of Runda is set to open its doors to the public in February 2017, Centum Group – the company undertaking the multimillion dollar venture – CEO James Mworia has revealed.
Mworia said the Centum Group’s real estate development of “large scale mixed use” would include residential, commercial, retail, and hospitality offerings within the 100-acre precinct.
He made the remarks during a media walkabout at the site to introduce the local media to the mall, which boasts a total of 200 shops, both local and international.
Shops unique to Two Rivers Mall include international brands such as LC Waikiki (fashion apparel), Villeroy&Bosch (home zone), Swarovski (jewelery and accessories), Anmol Jewellers, Carrefour, and Azadea.
South African retailers such as Mr Price (apparel and home) and Woolworths are also among the foreign-owned companies set to open mega shops at the mall.
Centum Investment – majority owned by Kenyan billionaire Chris Kirubi – has also invested in necessary infrastructure such as power and water and a unique riverfront experience which includes dancing fountains. The theme park comprises activities including a flume ride, bumper boats, water zorbing, and a water park.
The mall has a parking capacity of 2000 cars and a security system touted to be at military standards. This investment in security was not surprising to media as it was just in 2013 when terrorists struck another big mall in Nairobi – Westgate Mall – killing scores and leaving hundreds more injured and maimed.
Kirubi said that by constructing a mall unseen in the region, Kenya was expressing the story of “Africa rising” by going that extra mile to offer a destination that showed Africa as a place where all things were possible.
The complex would ultimately create jobs for many people, especially the youth, in different sectors. So far, the construction of the mall had benefitted local industries through the purchase of local raw materials such as cement and glass, as well as employing over 3000 workers, including engineers and other professionals, he said.
“We have a healthy mix of international and local stores. We have 50 international brands coming to Kenya for the first time ever.” Retailers in the food and hospitality sectors were also relying on local farmers to supply produce for consumption, he said.
For sustainable power production, the complex will have solar panels installed on the rooftop parking to complement the grid supply. Natural lighting and ventilation have also been leveraged in the design to drive energy efficiency and eliminate the need for artificial lighting and air conditioning.
South Africa’s City Lodge Hotel group is among property owners who have purchased plots on the development and has began construction of a three star hotel. Victoria Bank is also constructing an office block on its own plot.
The media witnessed many of the retail outlets putting final touches to their shops in readiness for the February opening which is set for Valentine’s Day. 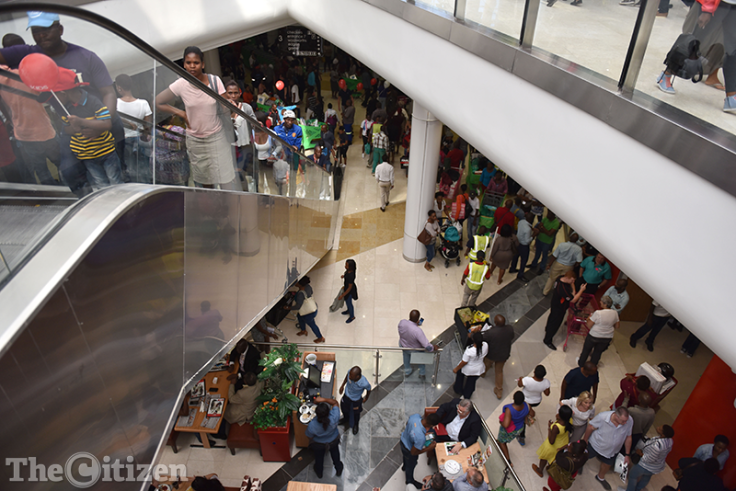