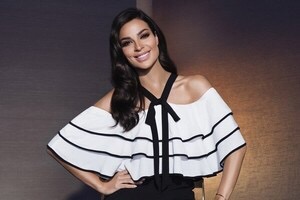 Lebanese actress Nadine Nassib Njeim joins forces with Saudi fashion brand
Jeddah-based fashion label femi9 has partnered with Lebanese actress and former Miss Lebanon, Nadine Nassib Njeim. The new brand ambassador has designed a collection, titled Selectedbynadine, with Femi9, which will be unveiled this Thursday, January 19 at a VIP event in Dubai.
Femi9 has been in business since 1999, and now has retail outlets in the UAE, Bahrain, Egypt, Syria and even Switzerland. The collection with Nassib Njeim features a colour palette dominated by reds, blacks and whites, in feminine silhouettes that embody a festive, Mediterranean-inspired spirit.
“I am thrilled to announce my brand ambassadorship with femi9; there is a perfect fit between me and the femi9 woman,” says Njeim. “Femi9 is like my ideal wardrobe as it caters to the dynamism of my life and the various roles I take on a daily basis: a mother, an actress and a woman, who just loves fashion.”
Femi9 stores in the UAE are located in Dalma Mall in Abu Dhabi and Sahara Center in Sharjah.