Amazon to launch own fashion brand, compete with UK high street
London – Amazon has firmly set its sights on world domination on all aspects of ecommerce and is thought to be investing in its own fashion label.
The company has reported poached senior design and buying experts from Marks & Spencer and Primark, according to Drapers, as it starts to build its own brand in the UK.
While Amazon already sells many fashion brands, including third party suppliers in the UK, it has yet to launch a brand that can compete with the stalwarts of the British high streets, like M&S and Next and online giants Asos and Boohoo.
Richard Lim, chief executive of Retail Economics told the Evening Standard the online giant has the power to ‘stir things up’. He said: ‘Amazon is a very cash rich business and if they want to launch into a sector, they won’t do things by half.’
Amazon has added over 350 new brands across its European sites
Amazon said it sold more than 60m fashion items after adding 350 new brands across its European websites earlier this month, making it one of the fastest growing categories.
It announced profits of 749 million dollars for the final quarter of 2016, a 55 percent increase on the previous quarter. After years of prioritising growth over profits, this was its seventh consecutive profitable quarter.
In 2015 Amazon Amazon opened a photography studio in Shoreditch, a 46,000 square-foot venue with 22 photography bays. The company said it is one of the largest of its kind in Europe and will help it create more than 500,000 images of clothes to its sites every year.
“Our aim is to make Amazon the best place to buy fashion online,” said Sergio Bucher, VP of Amazon Fashion EU, in a statement. “The opening of our new fashion studio, in the heart of one of the leading fashion capitals of the world, illustrates our ambitions.” 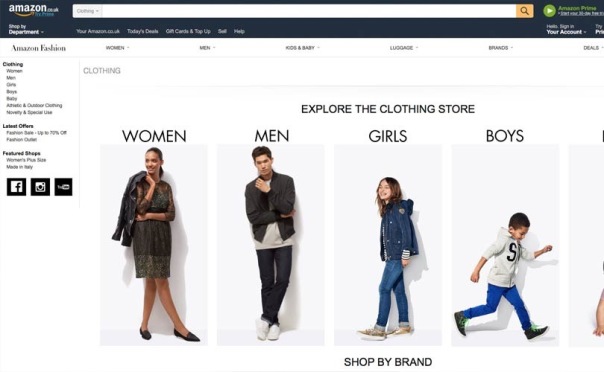