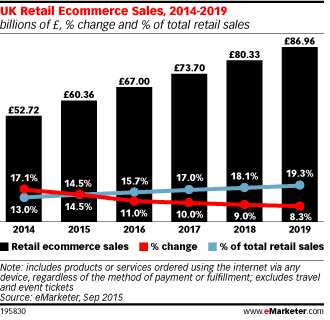 UK Retail Sales for Amazon Approaching 10 Billion Dollars
March 19, 2017
The United Kingdom is the world’s sixth largest economy, with a retail market estimated at $358 billion for 2016. As one of the world’s oldest and most mature economies, the UK will not grow at a rapid pace, certainly not with Brexit waiting to become a huge spanner in the works of the UK’s future growth prospects.
Nevertheless, it is a multi-hundred-billion-dollar economy that will, at least, grow in low single digits over the next few years. The UK’s e-commerce market has been growing steadily over the years, and should continue to help the economy’s growth engine chug along over the next several years.
UK retail
Arguably the most famous retailer to invade England, Amazon recorded 6.3 billion pounds ($9.03 billion) in sales from Britain in 2015, an increase of 8 percent over the year before. Amazon’s international sales were $35.418 billion in 2015, which means UK retail has been contributing nearly a fourth of Amazon’s entire overseas sales.
UK retail

Source: Tesco 2016 Annual Report
On the ground, Tesco, the UK’s largest retailer, reported nearly $43 billion in sales from their home market in 2016, and the company is struggling to keep sales growing. With more than 6.3 billion pounds from the UK to its name, Amazon is slowly inching up in the UK market.
Amazon is a relative weakling compared to big box retailers like Wal-Mart and Tesco, especially when it comes to grocery retail. And that’s fortunate for the likes of Tesco and Sainsbury’s in the UK, and Wal-Mart, Costco, Target et al back in the U.S.
That makes Amazon’s success and ongoing progress in the UK retail segment even more significant.
UK retail
According to data from Kantar.com, Amazon is not even in the picture as far as the UK’s grocery retail segment is concerned. It is one of Amazon’s known achilles points, and it will take years for their grocery efforts to bear fruit, in a manner of speaking.
On the positive side (for Amazon), the bulk of their growth in the UK is coming from the non-grocery segment, which means they’re eating into that market – consumer electronics, books, digital products, smart devices and so on – much faster. Too fast for the comfort of companies like Tesco, in fact.
And Amazon is not about to stop pushing in the UK retail market. The more Amazon’s gross merchandise value grows in a particular region, the higher Amazon’s investment in fulfillment centers, logistics and other capital expenses in the region. As investments increase in lockstep with the size of Amazon’s business in that region, margins will slowly keep improving, as they’ve already shown in the United States.