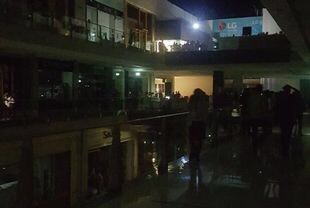 Dubai Mall, one of the world’s biggest shopping centres, was plunged into darkness on Monday evening after experiencing a power cut for nearly two hours.

According to photos posted on social media, hundreds of shoppers were forced to wander the mall in the dark. Lights went out and escalators stopped working at about 7.15pm local time.
At just before 9.15pm, Dubai Media, which initially announced the power outage, said the power had been restored.
The Dubai Mall issued a statement saying it regretted the inconvenience caused to shoppers and thanking them for their patience.
Dubai Electricity and Water Authority said the outage was caused by a problem with a cable at Dubai Mall Metro Station.
One Twitter user said earlier that shoppers were using the flashlight on their phones to navigate around the mall.
Another said: “Power still out, almost an hour now. No announcements from security or management. Very poor.”