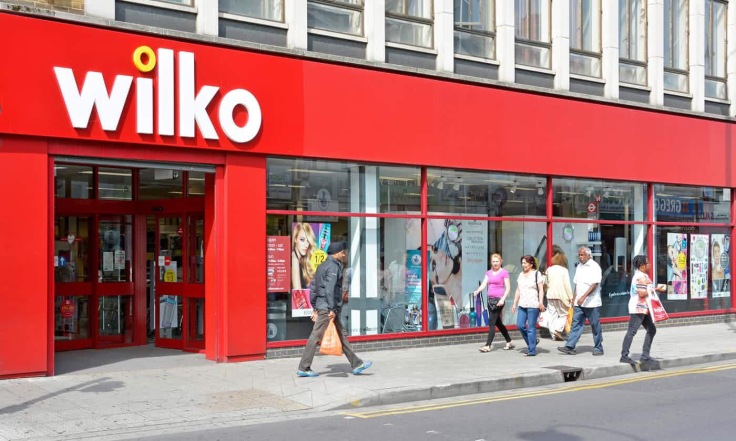 Wilko has reported an 80% drop in full-year profits. Photograph: Alamy
Wilko, the high street homewares and households goods chain, has warned almost 4,000 of its employees that they could lose their jobs in a shake-up that will strip out a layer of management.
The potential job losses cap a brutal week for British retail workers, with Asda placing 3,257 employees into consultation and Sainsbury’s announcing plans to axe more than 1,000 head office jobs.
Wilko, which recorded an 80% drop in full-year profits last month, said it had placed 3,900 staff working as stock supervisors, till supervisors and assistant managers, into consultation, which could lead to redundancy. However, the family-run business said the changes to its structure would also allow it to create about 1,000 new senior supervisor roles.
The company said its new “simplified retail team structure” would “ensure it is best placed to continue to thrive within an ever-changing retail landscape and to ensure it can operate successfully and competitively”.
The job cuts come soon after the company announced that the government’s “imposition” of a minimum living wage had hit profits. Despite the 80% decline in its pre-tax profits to £5.2m, Wilko’s board still paid the company’s multimillionaire family owners a £3m dividend.
Antony Houghton, the chain’s retail director, said that independent studies had found a “legacy of retail structures” that “created complexity to manage which aren’t simple, fair or transparent for our team members”.
He said the company was “committed to the future growth of the business and reviewing how we stay relevant to our customers. We do this by making sure all retail operations are fit for the future in order to provide customers with the best possible service.
“As a family-run business, we care greatly about team members and know that change is never easy. We are working with our recognised trade union the GMB, listening to team members and offering support at all levels. We are entering into a long period of consultation and wherever possible are aiming to redeploy team members into new roles and offering help and support to those seeking new opportunities.”
The company, founded by James Kemsey Wilkinson – known as JK – in Leicester in 1930 has grown to employ 20,000 people working in 406 stores across the country, but has struggled to compete with the rise of other discount chains such as B&M and Poundland.
Wilko, which recently shortened its name from Wilkinson, is 100% owned by the Wilkinson family and is one of the biggest privately-owned companies in Britain. It describes its mission as “Todobilation” – which it says describes the “jubilation in a to do. Either the excitement and anticipation of starting something or the sense of achievement when it’s done.”
In its annual accounts, the company hit out at George Osborne’s introduction of the national living wage, which starts at £7.50 an hour for over-25s. “Chancellor Osborne’s final austerity budget surprised the industry by its unilateral imposition of a statutory minimum living wage at well above expected levels,” the company said.
Lisa Wilkinson, a lawyer and grandchild of the founder, is chairwoman of the company and bought out the shares of her cousin Karin Swann, who was co-chair, for £63m in 2015.
This week Asda, Britain’s third-largest supermarket, singled out 3,257 employees in 18 underperforming and overstaffed stores, and is also understood to also be looking at staffing levels in a further 59 of its supermarkets.
The 18 stores facing staff cuts include branches in Halifax in West Yorkshire, Broadstairs in Kent and the Basildon Eastgate store in Essex. Staff will face a series of one-to-one meetings over the next three weeks. The eventual job-loss figure is expected to be in the hundreds.
Asda recently posted its worst annual figures since being taken over by Walmart in 1999, as fierce competition in the UK supermarket sector took its toll.
The supermarket industry is going through massive change as Tesco, Asda, Sainsbury’s and Morrisons cut costs to respond to the threat posed by the fast-growing discounters Aldi and Lidl, as well as grocery sales moving online.
Sainsbury’s is cutting more than 1,000 jobs at its head office as part of an efficiency drive designed to save £500m. The UK’s second-largest supermarket chain has drafted in McKinsey, the management consultancy, to draw up a headcount reduction plan. It comes on top of 400 job cuts in March.
Tesco, the country’s biggest supermarket, announced in June that it was cutting 1,200 jobs at its head office and 1,100 at a call centre.