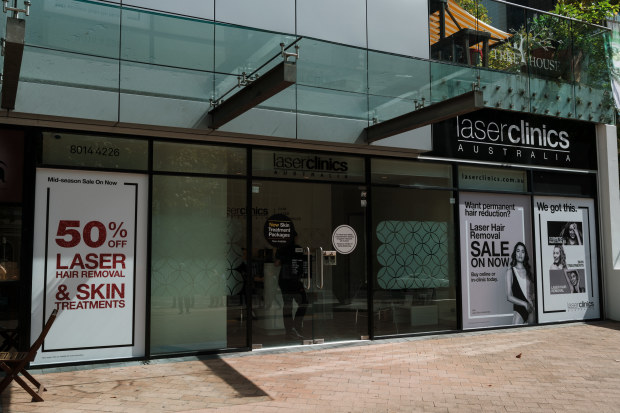 The private equity juggernaut has bought out dozens of clinics in an attempt to unite the network after two years of unrest and claims that systemic price gouging is pushing some to the wall.Investigative journalist and columnist

KKR has bought out dozens of hair removal and injectables clinics that have been trying to leave the franchise network for two years amid claims of gouging, systemic price discounting and lack of support.

The purchase of at least 38 clinics, with more in the pipeline, could represent almost half the LCA franchised network.

KKR paid $650 million for the Laser Clinics in 2017, which included the brand, franchisor licence, Skinstitut skincare product range and 80 clinics, nearly all of which were a 50/50 partnership with franchisees.

In June, Street Talk reported that LCA had secured a $300 million debt package and said the funding was “pegged for growth, including in offshore markets”. It currently has a global footprint of 200 clinics, making it the largest cosmetic clinic chain in the world. According to its website, staff perform more than 2.5 million treatments a year.

The purchase price for the clinics is believed to be less than $30 million, ranging from under $300,000 to just over $1 million, depending on the size and location of the clinic. The settlement figure is a far cry from the investment sunk into the business by some franchisees.

It is a long way from the $80 million compensation 52 franchised clinics sought in March last year when they joined forces and lodged a 140-page letter of dispute alleging that LCA had gouged them on costs for equipment and supplies, while forcing them to conduct aggressive discounting that made it difficult for them to cover their costs and conditioned customers to expect discounts.

‘It was desperation before losing everything’

Mediation for the unhappy franchisees failed in May last year. A second attempt at mediation was held earlier this year, and a settlement was agreed earlier this month.

“It wasn’t a choice to settle, it was desperation before losing everything,” one franchisee said. “For some in the group it was a choice between taking a small sum from their losses or losing their homes.”

The business model is based on LCA taking a 10 per cent royalty from every sale. But some franchisees argue that head office directives to discount services and products, coupled with hefty markups imposed on them by head office on machines, dermal-fillers, Botox and other products, bled the business.

LCA is the latest of the scandals that have plagued the $170 billion franchise system in Australia, which has been subject to multiple federal parliamentary inquiries, with little meaningful change. At its core is a failure of the law and regulators.

Until private equity entered the fray, initially with a 50 per cent sale to Archer Capital in 2014, then an outright sale to KKR in 2017, the relationship between franchisees and the franchisors – former actuary Babak Moini and legal IT expert Alistair Champion – was a partnership where everyone made money.

Private equity brought a change in emphasis, with the focus on how to make more money at head office, rather than how to continue the partnership with franchisees.

Discounting became more frequent, more players entered the market, and it became a race to the bottom, with customer loyalty based on who was offering the lowest price.

There was also a push to introduce new machines, sold by LCA to the clinics at a juicy markup.

For instance, in 2019 it introduced CoolSculpting, which was bought by the clinics and marketed as “a non-invasive treatment that freezes unwanted fat away”.

According to insiders, many franchisees found it hard to make money. The success rate of treatments was patchy, and beauty therapists did not actively sell it, particularly after retired supermodel Linda Evangelista posted on social media last year that she had become depressed after a fat freezing treatment.

“To my followers who have wondered why I have not been working while my peers’ careers have been thriving, the reason is that I was brutally disfigured by [a] coolsculpting procedure which did the opposite of what it promised.” She said “it increased, not decreased, my fat cells and left me permanently deformed even after undergoing two painful, unsuccessful, corrective surgeries. I have been left, as the media has described, ‘unrecognisable’.”

She filed a lawsuit with the manufacturer, which is defending the case. LCA declined to comment on the impact to the business of Evangelista’s social media post and the subsequent media attention.

Whatever the case, the perception is that constant discounting of services and international expansion will continue as KKR seeks to drive top-line revenue growth to fatten LCA up for an asset flip.

Things will only get tougher for franchisees

With a bear market in tow, and a gloomy economic outlook coupled with rising inflation and interest rates, alternative investment funds such as private equity will become more attractive, and players such as KKR will be investigating options for boosting returns.

As the cost of living bites into demand for cosmetic services, things will only get tougher for franchisees.

LCA declined to answer a series of detailed questions, including a clause that almost torpedoed the settlement deal with franchised clinics.

A source with knowledge of the deal said a clause seeking a warranty from the exiting group of franchisees in respect to underpayment of staff during their tenure tried to also include independent contractors. It meant if nurses decided to challenge their contracts, which classify them as independent contractors, not employees, the liability if they were successful would be a fortune in superannuation, workers compensation and holiday pay.

The franchisees pushed back, leaving LCA with a potential ticking bomb if there were a challenge.

In a statement, LCA confirmed it had bought 38 clinics and was finalising documentation with “a small number of remaining franchisees” and that the “terms and conditions of these sale contracts remain confidential”.

It said it was committed to delivering an exceptional customer experience. “We are looking ahead to working positively with our continuing group of franchisees, who are aligned with our strategy, values and share our commitment to driving sustainable growth, outstanding customer results and ongoing success for the brand.”

For the franchisees who have gone, there is scepticism that unity can be restored.

“It has been a harrowing experience, and we were lucky to get out,” one said.